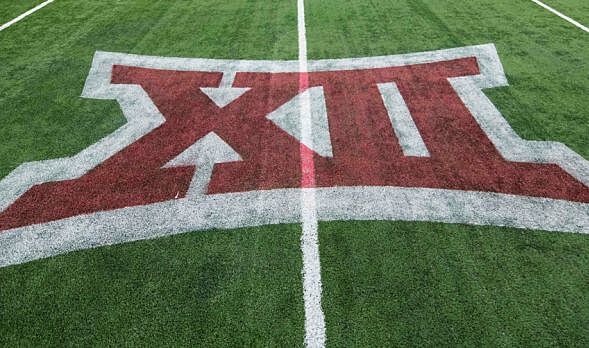 Oct 3, 2015; Arlington, TX, USA; A view of the Big 12 logo on the field after the game between the Baylor Bears and the Texas Tech Red Raiders at AT&T Stadium. The Bears defeat the Red Raiders 63-35. Mandatory Credit: Jerome Miron-USA TODAY Sports

The Big 12 Conference has been one of the greatest in college football since its inception in 1996. We rank the 50 best Big 12 football players of all-time.

When the Southwest Conference dissolved following the 1995 season, Texas, Texas A&M, Texas Tech and Baylor joined the members of the Big Eight Conference to create the Big 12. Just the second premier conference to expand to 12 teams in what was then known as Division 1-A, the Big 12 followed the model set forth by the SEC and split into two six-team divisions and set up a championship game following the regular season.

Since its inception in 1996, the Big 12 Conference has provided more than its fair share of great teams and players. Three teams from the league won national championships (Nebraska in 1997, Oklahoma in 2000 and Texas in 2005), and five players have been awarded the Heisman Trophy.

Of course, continued conference expansion hit the Big 12 hard and hurt the league’s prestige in 2012 when Nebraska bolted for the Big Ten, Texas A&M and Missouri left for the SEC and Colorado joined the Pac-12. Former SWC member TCU joined its four former conference mates, and West Virginia was added as well.

Now, the Big 12 has just ten members and no conference title game, which makes conference expansion a constant topic of conversation around the league and across the country.

As the conference continues to evolve, and we look forward to the 20th Anniversary of the league, we take a look back at the 50 best Big 12 football players of all-time.

*Note: Players included must have played at least one season in the Big 12 Conference. Check back later for our best players of the Big Eight and Southwest Conference. Also, statistics used come primarily from Sports-Reference.com and team media guides, and in some cases do not align perfectly with official NCAA statistics.

Next: Begin Slideshow
Next1 of 53Prev post
Use your ← → (arrows) to browse
Event Tickets
Powered by StubHub
Top Stories