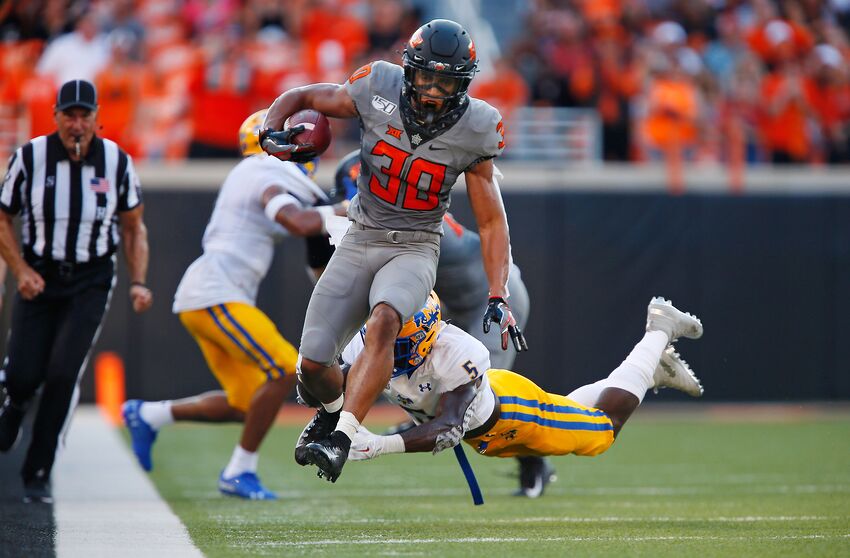 STILLWATER, OK - SEPTEMBER 7: Running back Chuba Hubbard #30 of the Oklahoma State Cowboys leaps to escape the reach of defensive back Jovon Burriss #5 of the McNeese State Cowboys in the second quarter on September 7, 2019 at Boone Pickens Stadium in Stillwater, Oklahoma. (Photo by Brian Bahr/Getty Images)

After putting up 250-plus yards against Tulsa, Oklahoma State football’s Chuba Hubbard needs to be in the Heisman Trophy conversation.

For the second time in three games to start the year, Cuba Hubbard has broken the 200-yard rushing mark and nearly matched his season total from Weeks 1 and 2 in Week 3 alone.

Tulsa didn’t stand a chance against the superstar back from Oklahoma State as he totaled 32 carries for 256 yards and three touchdowns, including a 75-yarder. He just couldn’t be stopped by a defense that had shown improvement up front so far this season, and that’s an encouraging sight for Oklahoma State fans.

On a day when Spencer Sanders wasn’t exactly lighting it up with his arm, the run game picked up the slack and Hubbard proved he needs to be in the Heisman Trophy conversation.

Is this me saying Hubbard is a serious Heisman candidate? Yes and no.

While a player with his talent should definitely be considered, he’s not exactly playing for a national contender. If Oklahoma State continues to win and jump into the AP Top 25, that might change, but right now the Cowboys have wins over Oregon State, McNeese and Tulsa. They’re not wowing any AP voters just yet.

But rushing for over 200 yards is impressive no matter the opponent.

Hubbard is an electric ball-carrier and looked like an unstoppable force against the Golden Hurricane, almost single-handedly leading the Cowboys to a 40-21 win.

Not many players can put the team on their back like Hubbard did against the Golden Hurricane in Week 3, but he’s a special player who deserves more national recognition.